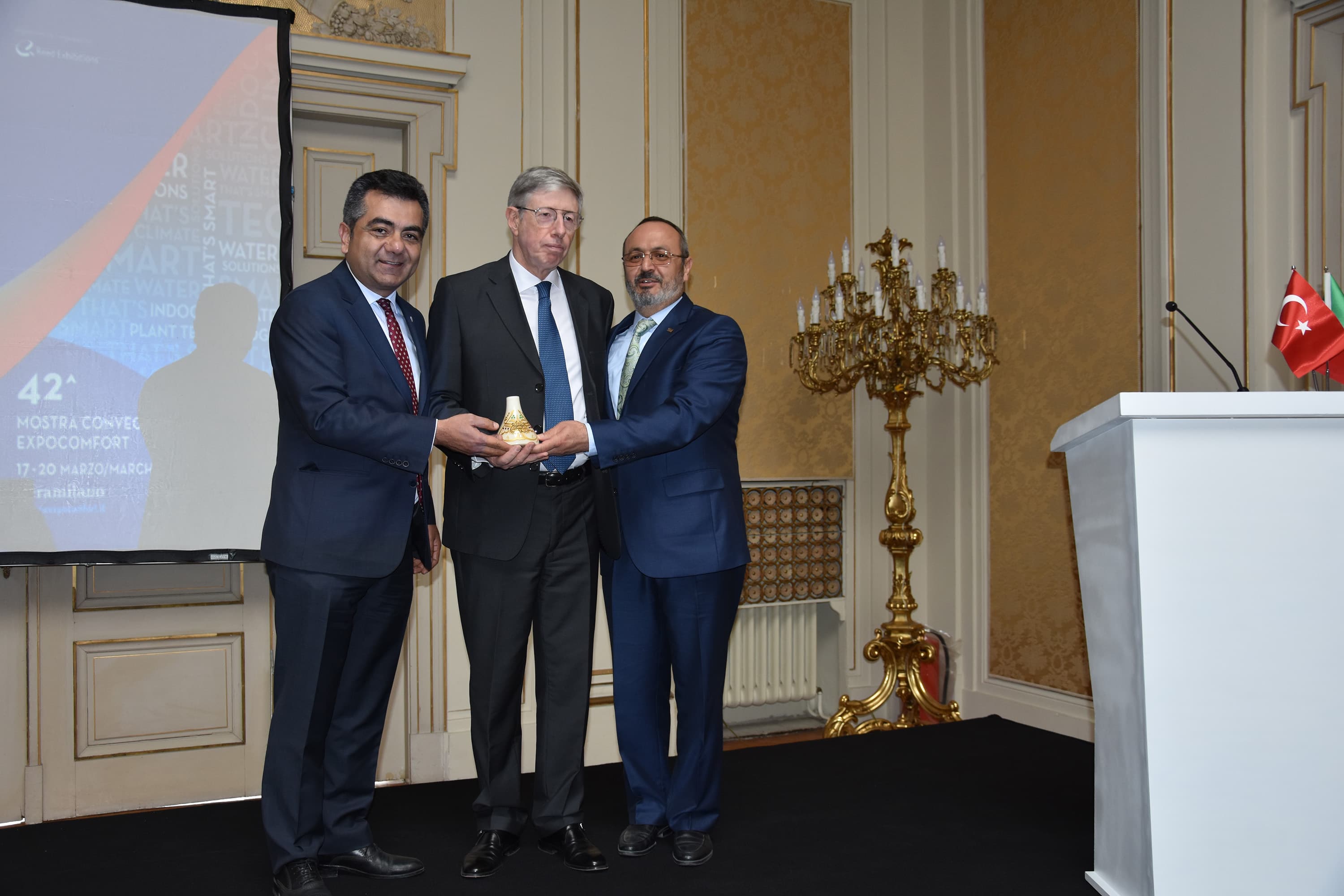 Turkey was named as the partner country in Mostra Convegno Expocomfort, one of the biggest fairs of the HVAC&R sector. The fair will open its gates for the 42nd time on 17-20 March 2020 in Milano, and the Turkish HVAC&R sector will have a strong presence during the event.

Speaking on the event, Turkish HVAC&R Exporters Association President Mr. Mehmet Hakkı Şanal highlighted the strong and long-lasting ties between Italy and Turkey, reminding that Italy is one of the main trade partners of Turkey. “The foreign trade volume between the two countries, in terms of both general foreign trade as well as HVAC&R products, is impressive. Italy is among the three biggest exporters of Turkish HVAC&R products. This is also the case in HVAC&R imports” said Mr. Şanal.

Mr. Şanal also stated that Mostra Convegno Expocomfort is one of the most significant HVAC&R fairs in the world: “In 2018, 2.388 participating firms exhibited their products in a fair area of 325 thousand square meters. 1.234 foreign firms attended the event. The fair attracted a total of 164 thousand visitors, 42 thousand of which were foreigners. Turkey was represented by 144 companies in the fair, the highest number for any foreign country. We hope that Turkey’s participation in the 2020 fair as the partner country will contribute positively to our efforts. We are working in close and strong cooperation with our Italian colleagues and Italian Chamber of Commerce Association.”

“Turkish firms to be given priority”

Mr. Şanal stressed that as Turkey will be the partner country in the event, Turkish firms will be given priority in the selection process, which will enable Turkish firms to occupy more and better places in the event. There will also be special events for Turkey’s promotion, and Turkey’s status as the partner country of the fair will be highlighted throughout the event. Mr. Şanal also made the following remarks: “ISIB will have information stands at the entrance and main hall during the fair. We will also have a special meeting room again in the 2020 fair, which can be used by Turkish firms who do not have their own stands. We will also make advertisements in the entrance to the subway and the northern entrance of the fair for participants that drive to the event. We will also have other activities in various points across the fair area. Turkey has already been included in the fair catalogue and other visibility materials”.

Şanal also said that Turkey will leave a strong mark on the occasion.

“Turkey is an important country in the Mediterranean basin”

Massimo Gaiani, Ambassador of Italy in Ankara also highlighted the strong commercial ties between the two countries: “In the entire Mediterranean basin, there is no other country we cooperate as much as we do with Turkey. Turkey is an important country. The trade volume between the two countries has surpassed the USD 20 billion threshold. These commercial relations also create a significant added value. There is a strong relation between Turkey and Italy.”

Ambassador Gaiani also made some remarks on future investments: “Italian companies have been investing in Turkey since the 1960s and there is grand cooperation in terms of technology transfer. These relations have got stronger over the years. Currently Italy is the second biggest investor in Turkey followed by recent investments worth USD 500 million. This of course shows how much Italian businesspeople trust Turkey”.

Mr. Gaiani also said that Turkey has a huge potential for further growth, and added: “We see a very dynamic opportunity to conduct business in Turkey. Turkish investments in Italy are also of great importance. Turkish companies have invested in strategic sectors in Italy. Such investments bears witness to the mutual trust the two countries have in each other. This will only contribute positively to the betterment of relations.”


Livio Manzini, President of Italian Chamber of Commerce Association, stated that the Association targets an increase in mutual trade between the two countries and takes relevant steps to achieve this target. Manzini said his Association takes part in organization of various sectoral fairs in Italy and Turkey to support Italian and Turkish exports.


Emphasizing his satisfaction at Turkey’s selection as the partner country in the event, Manzini said: “We are here with the knowledge that Mostra Convegno Expocomfort and BIE – Biomass Innovation Expo Fair, which are the reasons why we are here today, will open up new opportunities for Turkish exporters. I am proud to say that Turkey will participate in Mostra Convegno as the Partner Country.


Manzini also said that the fairs were a great success in recent years and that Mostra Convegno has already become one of the most important fairs in the world. Turkey’s status as the partner country in the 2020 fair, according to Manzini, will contribute greatly to Turkish firms in promotion and advertisement of their products in fair before an international audience.

This website uses cookies to improve your experience while you navigate through the website. Out of these cookies, the cookies that are categorized as necessary are stored on your browser as they are essential for the working of basic functionalities of the website. We also use third-party cookies that help us analyze and understand how you use this website. These cookies will be stored in your browser only with your consent. You also have the option to opt-out of these cookies. But opting out of some of these cookies may have an effect on your browsing experience.
Necessary Always Enabled
Necessary cookies are absolutely essential for the website to function properly. This category only includes cookies that ensures basic functionalities and security features of the website. These cookies do not store any personal information.
Non-necessary
Any cookies that may not be particularly necessary for the website to function and is used specifically to collect user personal data via analytics, ads, other embedded contents are termed as non-necessary cookies. It is mandatory to procure user consent prior to running these cookies on your website.
SAVE & ACCEPT